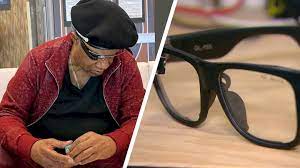 Technology is still some years away, tests of implants in monkeys are promising

But science is edging closer towards allowing blind people to see again — without using their eyes.

Researchers are developing a pair of high-tech glasses with a built-in camera that ping images wirelessly to the brain.

The gadget bypasses nerves between the eyes and the brain, which become damaged in most cases of blindness.

A team of Dutch experts are trialling it in Eindhoven, which has been described as 'the place to be' when it comes to blindness research.

Similar technology has been backed by legendary American musician Stevie Wonder who lost his sight as a baby.

A number of experimental therapies and gadgets for incurable blindness have emerged over the past decade amid medical advances.

Among those currently in the works are bionic eyes being trialled in the US and UK, and a trial using gene-editing tool CRISPR to cure genetic blindness.

What Did Albert Einstein, Da Vinci, and Steve Jobs Have in Common: Dyslexia