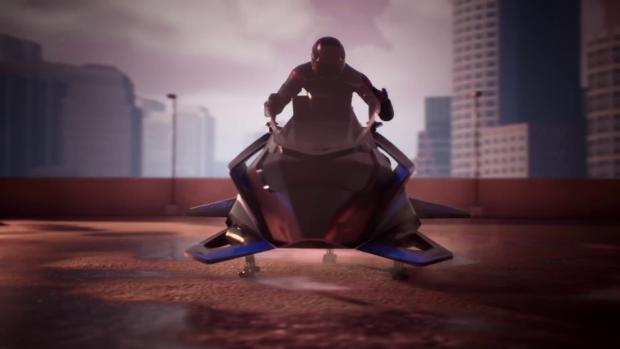 His company's groundbreaking work on jetpacks and flying motorcycles seems to proceed at a dizzying pace, and it's always fascinating and enlightening to learn what's new on the workshop bench, so we caught up with Mayman earlier this month to see where things are at.

While the jetpack business continues to progress, with some fun developments in the pipeline, the company's now devoting about 70 percent of its time and energy to its Speeder Air Utility Vehicle. The Speeder will be a totally unique and modular aircraft capable of extremely high speeds, over distances potentially as high as 1,000 miles. It can be configured as a manned flying motorcycle, an unmanned ultra-fast cargo drone, a firefighting platform, or potentially even a manned "Pocket F-35" capable of approaching the speed of sound. It can fly as a jet-powered quadcopter, or clip on detachable wings for high-speed, long-range missions.

Naturally, the US defense agencies are very interested, and the Speeder is one of the top candidates for the US Air Force's AFWERX High-Speed VTOL program. There are also some civilian missions it'd be perfect for, even if its roaring jet engines would be far too loud for inner-city transport.

When we last interviewed Mayman back in July, the team was completing tethered flight tests on the first Speeder prototype, a jet-powered drone called the P1, covered in so much scaffolding it looked like a flying clothes hoist. Since then, it's been replaced by a smaller, but still very industrial looking P1.5 prototype that will soon fly off tether.

Within a few months, we'll see the P2, which will actually start looking like the flying motorcycle that will go to production. This is the prototype that'll eventually begin manned flight tests and high-speed forward flight tests. Like the production aircraft, it'll be highly modular – the JPA team will initially be able to swap from a piloted motorcycle version to a heavy-lift cargo carrier.

A severe pilot shortage in the U.S. leaves airlines scrambling for solutions

Report: UAE's Emirates Airline Set to Use 'Bitcoin as a Payment Service'