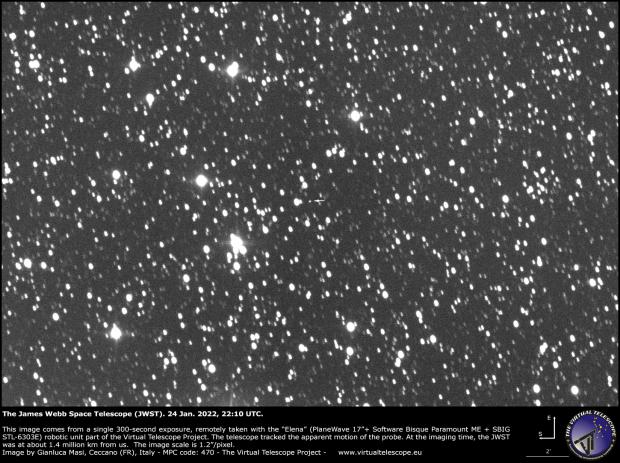 It has now settled into orbit one million miles from our planet and is gearing up to look back in time towards the dawn of the universe.

But before James Webb captures and releases its first starry images in June, astronomers have been able to snap photos of the $10 billion (£7.4 billion) space telescope itself, from right here on Earth.

The Rome-based Virtual Telescope Project tracked Webb through space and found it in the bowl of the Big Dipper.

Astronomers then used a robotic telescope to take a five-minute exposure of Webb just as it was arriving at its destination at the Earth-sun Lagrange Point 2, about 930,000 miles (1.5 million km) away from our planet.

Project manager Gianluca Masi said: 'Our robotic telescope tracked the apparent motion of the James Webb Space Telescope (JWST), which is marked by an arrow in the centre.

'At the imaging time, JWST was at about 1.4 million km from us and it just reached its final destination, the L2 (2nd) Lagrangian point of the Earth-sun system. As seen from the sun, that L2 point is directly behind the Earth.'

You don't necessarily need a telescope to spot Webb, however, as NASA has said it may be possible to see the space observatory with binoculars if you know where to look.

'It's just near the bowl of the Big Dipper,' Lee Feinberg, the Webb optical telescope element manager at NASA Goddard, said in a webcast event on Monday.

'You can't quite see it with your naked eye, but I'm told you can see it with binoculars.'

The 15,000mph space crash that may help save the future of mankind: