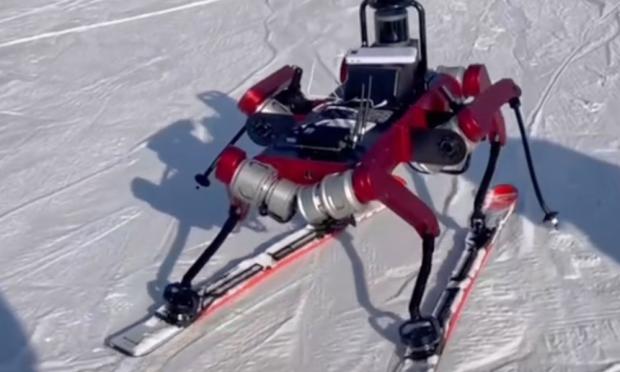 A six-legged skiing robot can be seen expertly slaloming down a snowy white slope in unbelievable footage of tests undertaken in Shenyang, China this month.

The robot — which stands with two legs on each ski and grips ski poles with its middle legs — was developed by experts from the Shanghai Jiao Tong University.

Putting the machine through its paces on both beginner and intermediate slopes, the team showed that the bot can stay upright, turn and avoid crashing into people.

In future, the researchers said, the bot might be able to compete in robot skiing competitions — and even patrol mountains and aid with snow-bound rescues.

The skiing automatons was developed by mechanical engineer Gao Feng and colleagues at the Shanghai Jiao Tong University.

'In the tests, the robot showed high flexibility and agility,' they added.

'It can be controlled by remote human-computer interaction, which enables it to ski through the crowds and adds the fun of skiing with a robot for the skiers.'

The legged robot research team developed the skiing machine under the call of 'Winter Olympics with Science and Technology'.

The project has been supported by the National Key R&D Program of China's Ministry of Science and Technology.