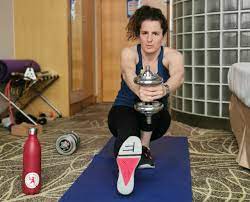 Patrizia Kummer, a Swiss athlete who won a gold medal at the 2014 Sochi Olympics, is unvaccinated against the coronavirus, so she is spending 21 days in isolation in China before the Winter Games begin in Beijing on Feb. 4.

Even though vaccine rules are strict for the upcoming Olympics, a few unvaccinated athletes will still be taking part.

Kummer said she doesn't want to influence anyone else's views on vaccination and thinks the quarantine requirement is fair, but also declined to discuss her "personal reasons" for refusing a vaccine.

The Beijing Games are being held under severe protocols as part of China's " Zero COVID " policy. The government has locked down several cities in the lead-up to the Olympics because of the presence of only a handful of cases of the highly contagious omicron variant that has surged throughout the world.

Parents who ran marathon with their six-year-old son slam...