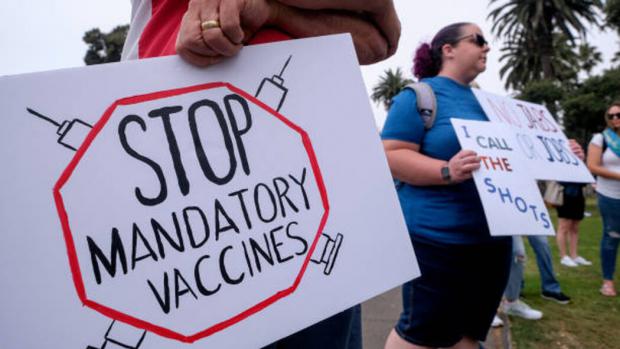 Federal law enforcement in Washington, D.C., has been closely monitoring social media for signs of potential violence and extremist activity ahead of a widely publicized demonstration against vaccine mandates this weekend, according to documents obtained by Yahoo News.

"Defeat the Mandates: An American Homecoming" is being billed as a peaceful gathering to promote unity among people who oppose COVID-19 vaccine requirements implemented across the country in an effort to mitigate the impact of the ongoing pandemic. The event is scheduled to take place on the National Mall this Sunday, Jan. 23, beginning with a march from the Washington Monument to the Lincoln Memorial, followed by a rally featuring speeches from several prominent anti-vaccine advocates, including Robert F. Kennedy Jr., whose nonprofit advocacy organization, Children's Health Defense, is one of the event's sponsors.

According to a permit application submitted by Children's Health Defense to the National Park Service last month, approximately 20,000 people are expected to attend the event.

Defeat the Mandates has attracted the attention of the Department of Homeland Security as well as the U.S. Capitol Police, both of which have circulated intelligence bulletins in recent days assessing the potential for violence stemming from Sunday's march.

As of Friday, none of the reports obtained by Yahoo News concerning the event have cited evidence of specific or credible threats linked to it. However, as one recent assessment from the U.S. Capitol Police Intelligence and Interagency Coordination Division states, "Due to the heightened divisive atmosphere surrounding COVID-19 mandates and vaccinations, altercations or interpersonal violence cannot be ruled out."