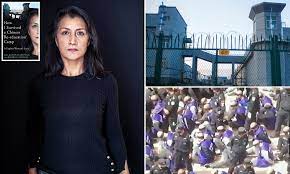 She was Prisoner No 9, and cruelly forced into taking vaccination by her captors

One at a time, our warders led us into a makeshift infirmary where men in lab coats were waiting. There was no choice.

I was told by one of the superintendents: 'You must be vaccinated. You're 50 years old. Your immune system isn't what it used to be. If you don't do this, you might get the flu.'

Terrified of reprisals if I didn't agree, I signed a document giving my permission. One of the men jabbed the vein in my arm. I was so stupid.

I had been a prisoner in a Xinjiang 're-education' camp for a year. The only horizon I had was the line of barbed wire that cut us off from the rest of the world.

Other women in the internment camp had told me that their periods had stopped shortly after such 'vaccinations'. The younger women wept and grieved. They had hoped to start families once they were released from the camp.

Past the menopause myself, I tried to comfort them, though a horrific thought was already growing inside me: were they sterilising us?