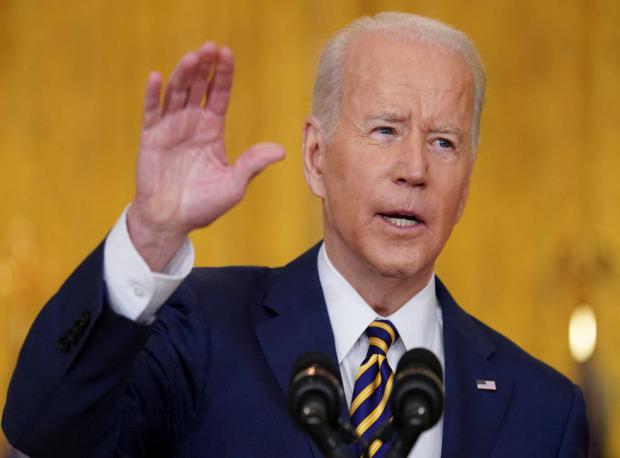 President Joe Biden today used a script to offer his fulsome backing to Ukraine after he yesterday inflamed the invasion crisis by suggesting a 'minor incursion' by Russia would go unpunished.

Biden said Thursday a move by any Russian forces into Ukraine would constitute an unacceptable invasion.

Biden also said the U.S. would respond to any moves by 'Little Green Men', a reference to Russian soldiers posing as militia, as well as cyber actions and 'paramilitary tactics.'

'I've been absolutely clear with President Putin. He has no misunderstanding: If any – any – assembled Russian units move across the Ukrainian border, that is an invasion,' Biden said at the White House, reading from a prepared text at the top of a meeting.

He said an invasion would be met by a 'severe and coordinated economic response' that he has discussed in detail with allies 'as well as laid out very clearly for President Putin.'

And he later got prickly with a Fox News reporter who asked him about the Ukraine. As reporters were being pulled out of his meeting with his Council of Advisors on Science and Technology, Jacqui Heinrich of Fox News shouted at him: 'Why are you waiting on Putin to make the first move, sir?'

The president's response was captured by audio engineers. 'What a stupid question,' he said.

Biden caused international fury yesterday when he said Russia might not be punished for a minor incursion. It lead to an immediate clarification from the White House and Kamala Harris did a round of TV interviews this morning to push back on it.