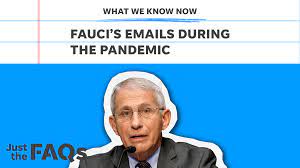 New evidence has emerged that suggests that Dr. Anthony Fauci not only initiated efforts to cover up evidence pointing to a lab origin of SARS-CoV-2 but actively shaped a highly influential academic paper that excluded the possibility of a lab leak.

Fauci's involvement with the paper wasn't acknowledged by the authors, as it should have been under prevailing academic standards. Neither was it acknowledged by Fauci himself, who denied having communicated with the authors when asked directly while testifying before Congress last week.

The article, Proximal Origin, was co-authored by five virologists, four of whom participated in a Feb. 1, 2020, teleconference that was hastily convened by Fauci, who serves as director of the National Institute of Allergy and Infectious Diseases (NIAID), and Jeremy Farrar, who heads the UK-based Wellcome Trust, after public reporting of a potential link between the Wuhan Institute of Virology in China and the COVID-19 outbreak.

The initial draft of Proximal Origin was completed on the same day the teleconference, which wasn't made public, took place. Notably, at least three authors of the paper were privately telling Fauci's teleconference group both during the call and in subsequent emails that they were 60 to 80 percent sure that COVID-19 had come out of a lab.

"I deny that I was bribed!"

Clueless, pharma-infested FDA now says independent media is "leading cause of death in US"