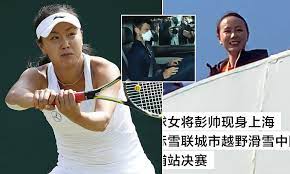 Over the following days, his fight to play at the Australian Open transfixed the world.

All the while, Peng Shuai remained locked in the shadows. She won't compete in Melbourne, either.

Last weekend marked 67 days since the Chinese player accused Zhang Gaoli - the country's former vice-premier - of sexual assault. In that time, Peng has all-but disappeared - seen and heard only via a few stage-managed public appearances.

Last weekend also happened to mark her 36th birthday. And yet, as tennis descends Down Under for its first major of 2022, the spotlight has shifted elsewhere. Just as Beijing wanted.

So what now for Peng? After a flurry of embarrassment and condemnation, has China succeeded in silencing the former Grand Slam champion? And as will we ever know what fate really befell her?

Earlier this month, Alize Cornet brought lingering questions back to the surface.

'I'm still a little bit worried about (Peng),' the French player said. 'I don't know where is the truth and where are the lies.'

Cornet was among the first to seek answers with the hashtag #WhereIsPengShuai.

Don't believe the headlines: Google Trends for "climate change" are not rising...