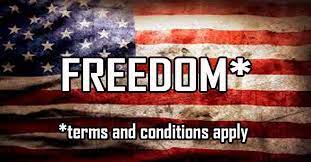 The analysis showed that the least free states were - as in previous years - New York, Hawaii and California

The freest states were New Hampshire, Florida and Nevada, with the rankings again remaining unchanged, year on year

States were then ranked by their freedom in 23 categories including education, health insurance, economic freedom, marriage, marijuana and guns

William Ruger and Jason Sorens, the authors, conclude that 'for the average American, freedom has declined generally'

Death by a Thousand Cuts: Where Is the West's Ukraine Strategy? "Clueless Pentagon and CIA.

MAY DAY! MAY DAY! WILL THE USA SURVIVE THE MONTH OF MAY?