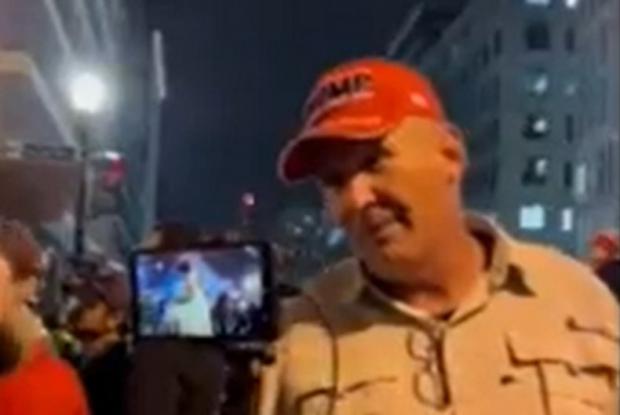 A participant of the pro-Trump rally that escalated into the breach of the Capitol Building last year was pinpointed as a possible federal agent provocateur, but critics call the claim a 'conspiracy theory'.

How did Ray Epps make headlines?
Epps was part of the large crowd of supporters of then-President Donald Trump, who convened to Washington, DC ahead of the congressional certification of Joe Biden's victory in the 2020 election. He was filmed in four separate instances on January 5 and 6, which many people on the right find highly suspicious. His behavior at the time, and certain facts about his life, make him a good candidate for being a federal informant and possibly even a key actor in a presumed plot to incite violence on Capitol Hill to the benefit of the Democratic Party, critics alleged.

What exactly did he do in January?
According to footage, on January 5, Epps talked with other members of the scheduled protest, calling on them to "go into the Capitol" the next day. "Peacefully," he stressed on one occasion, which prompted others to start chanting "Fed! Fed!" in response.

On January 6, he was filmed directing demonstrators to go towards the Capitol after the speech Trump delivered at the rally. Later, he was filmed in front of a police barricade moments before protesters broke it down. In the video, Epps can be seen saying something to another person who was wearing a red MAGA hat, but didn't take part in the attack on the barricade.
There is no evidence that he personally went inside the building after the breach.

When was that discovered?In the early days of the investigation, the footage was part of a trove of publicly available information on the riot. Epps was identified by local press in Arizona, his home state, shortly after the dramatic events and was interviewed about his role.

BOMBSHELL: Their Plan Failed -- It's OVER!

It's Time to Reclaim Our World (Publisher Recommended)

Mass Trials in Cuba Deepen Its Harshest Crackdown in Decades