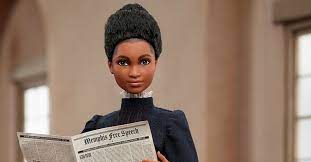 Other dolls in series include Ella Fitzgerald, Susan B. Anthony, and Rosa Parks

Mattel has created a Barbie doll to honor the black American journalist Ida B Wells, who was born into slavery and famously helped to found the NAACP.

Wells, who was born into slavery in Mississippi in 1862 during the Civil War, was a skilled writer who used her skills as a journalist to draw attention to the conditions experienced by African Americans in the South.

She was an activist and researcher who battled sexism and racism across the late 19th and early 20th centuries, founding the National Association of Colored Women's Club and helping to set up the NAACP.

WHY DOMINO'S GAVE OUT GIFT CARDS TO LOCAL RESTAURANTS