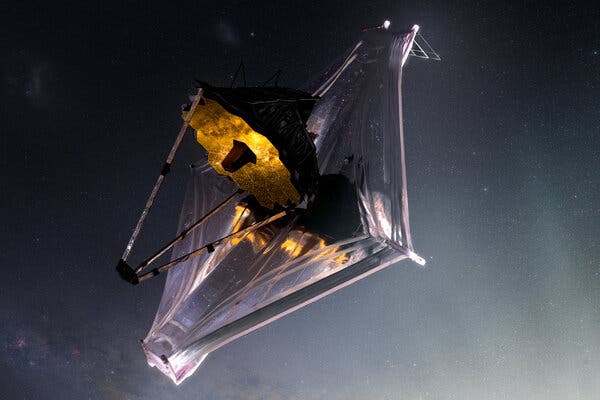 NASA's US$10 billion James Webb Space Telescope has completed its final deployment without a mishap. Starting today at 8:53 am EST, the starboard wing of the 21-ft (640 cm) gold-plated primary mirror began to swing, locking into position at 1:17 pm.

Today's unfolding of the last part of the giant space telescope marks the end of a nail-biting series of events for the Webb since its long-delayed launch on December 25, 2021. Because the telescope and its supporting spacecraft are so large, the whole thing had to be folded up like an elaborate and very expensive piece of origami to allow it to fit into the nose cone of the Ariane 5 rocket that hurled it into space.

While this arrangement did allow the Webb to be launched, it presented NASA and its partners at ESA and the Canadian Space Agency with a problem. Normally, once a spacecraft is in orbit, that's pretty much job done except for unfolding some solar arrays and an antenna, but with the Webb, things were much more complicated with many more chances of something going wrong.

The first deployment after launch was the simplest and even routine as the solar array to power the spacecraft unfolded, followed by the antenna array to maintain radio contact with Earth. Then the forward and aft pallets supporting the sun shield that protects the telescope against the light and heat of the Sun, Earth, and Moon unfolded. After this, the telescope extended slightly from the spacecraft bus on a boom to further insulate it and a flap opened that acts like a sail to use the solar winds to stabilize the telescope's attitude.

Then came the trickiest part. The port and starboard booms used to unfurl the sun shield were extended and then the shield itself was deployed. The shield consists of five extremely thin layers of a coated polymer called Kapton, each covering an area the size of a tennis court. With a small space between each layer to allow trapped heat to radiate away, each layer is successively cooler, allowing one side of the shield to keep a temperature of -370 °F (-223 °C) on the telescope side and 230 °F (110 °C) on the sunward side.

Film Studio to Be Launched in Space in 2024