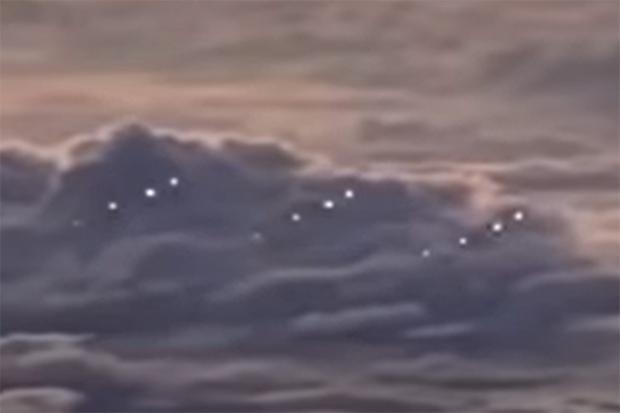 A VIDEO shot from an airliner cockpit has emerged showing what appears to be a fleet of 12 UFOs flying in formation.

The pilot who shot the footage can be heard reacting in astonishment to the eerie lights that appeared and then vanished in clouds above the Pacific Ocean.

At first, nine lights are visible in the video which then becomes 12 lights moving in formation.

The closest UFO disappears before three more objects reappear outside of the group.

A pilot can be heard saying: "I do not know what that is.

He then simply says "gone" as they vanish from view.

When the video, filmed at 39,000ft above sea level, was shared on social media many praised it as "amazing" and the best ever UFO footage.

But others were quick to point out that the lights could be anti-missile flares shot from a warplane.

It is possible that jets could be carrying out wargames because the footage was shot in the hotly contested South China Sea.

This section of the Western Pacific is a strategic shipping channel, a rich fishing ground as well as containing unexploited oil and gas fields.

Beijing claims it owns most of the disputed area, despite several other countries having seemingly legitimate claims under international law.

In recent years it has been building artificial islands on which military bases have been built in a bid to take control.