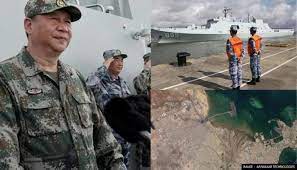 American officials who spoke to the WSJ indicated that the reports "raise the prospect that Chinese warships would be able to rearm and refit opposite the East Coast of the U.S.—a threat that is setting off alarm bells at the White House and Pentagon."

Last April, the commander of US Africa Command, Gen. Stephen Townsend, first raised the possibility of this "most significant threat" of a PLA military Atlantic presence during Senate testimony - describing that Beijing is eyeing "a militarily useful naval facility on the Atlantic coast of Africa."

"By militarily useful I mean something more than a place that they can make port calls and get gas and groceries," he said at the time. "I'm talking about a port where they can rearm with munitions and repair naval vessels."

But for all the "alarm" in Washington and the defense establishment, it bears pointing out that Equatorial Guinea is 7,000 miles away from the United States mainland. Additionally the US maintains at least 750 bases across some 80 countries worldwide, including 29 or more known bases stretching from one side of Africa to the other.

My Time in the Tank