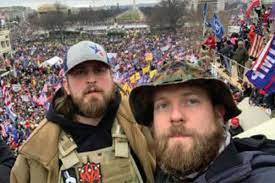 Ryan Nichols, a 30-year-old Texas man who served in the U.S. Marine Corps, said in a Dec. 1 motion that footage deemed sensitive by the Department of Justice (DOJ), in fact, contains exonerating evidence for him and other Jan. 6 defendants. Nichols has been jailed in Washington, D.C., since Jan. 18 on numerous charges, including civil disorder, disorderly conduct, and unlawful possession of a dangerous weapon on Capitol grounds.

Investigative reports and congressional hearings have claimed that undercover law enforcement agents may have participated in the Jan. 6 riots, but the Dec. 1 filing marks the first time such allegations have been made in court records against specific people, according to Nichols's attorney, Joseph McBride.

"We have more than a good-faith basis to make these allegations," McBride told The Epoch Times. "We don't have conclusive findings, but this is based on months of investigation.

"This is a call for answers."

Moment Florida cop grabs female officer by the throat and shoves her into patrol car...

Washington's Bi-Partisan Russia-Bashers Are Determined to Start a War

Watch: UN Debit Cards Being Given to US-Bound Migrants

5G goes live in the US and sparks international chaos:

Victoria's Secret model Joy Corrigan leaves little to the imagination in a mini-dress...

Athletes competing at the Winter Olympics in Beijing next month told they will be under...

Israel Used Pegasus Spyware Against Own Citizens For Warrantless Surveillance