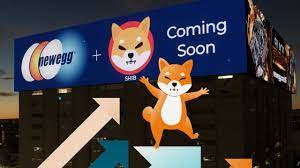 A leading tech-focused retailer, Newegg, has announced its support for the meme cryptocurrency shiba inu (SHIB) with the launch of a massive billboard ad campaign. Newegg says it is set to accept shiba inu for payments in early December, which would be sooner than when AMC Theatres plans to add SHIB.

Newegg is one of the leading tech-focused online retailers in North America, with a global reach in Europe, Asia Pacific, Latin America, and the Middle East. Its platform focuses on computer parts, PC components, laptops, gaming systems, automotive parts, and office supplies.

People That Are STILL in Denial About Bitcoin!

Hands off our Children Music Video

CARING CORRUPTED - The Killing Nurses of The Third Reich

It's Time to Reclaim Our World

How Holland Became The Most Efficient in the Agricultural Field

A Review of the Science

Dr. David Martin Explains How to Use the Law Against Covid Vaccine Coercion

We Are All Djokovic, Now