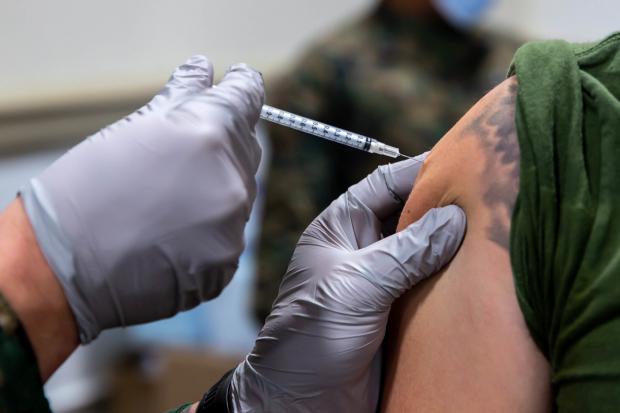 Some 95 percent of active-duty Marines had received at least one COVID-19 vaccine dose by the deadline but that leaves nearly 7,400 who have not gotten a jab.

"I have great appreciation for all those who made these vaccinations possible, including the civilian and Navy medical personnel who worked tirelessly over the past months to protect our Marines and families," said Gen. David Berger, commandant of the Marines, in a statement.

The remaining members without a jab face being discharged if they aren't granted an exemption. Sean Timmons, a managing partner at Tully Rinckey, says none of his clients are yet to face an initiation of separation, though they are being threatened with it verbally.

Like every other military branch to date, the Marines have approved zero religious accommodation requests. Some 2,441 such requests have been lodged, and

"It looks extremely concerning. It's also problematic," Timmons told The Epoch Times, adding that members who are separated after their religious exemption requests are turned down will likely have a strong case in court.

But military branches informed a court earlier this month that no exemptions have been granted and none have yet signaled that's changed.

Vaxx Card Checks Will Not Protect You! No Controversial Arguments. Just Common Sense.

First time detection of the vaccine spike protein in a person who died after vaccination...