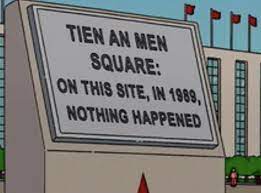 The legislation was part of the continuing unfolding of the sweeping pro-China 'national security law' of June 2020, with the film censorship even working retroactively for any movies or programming "found to be contrary to national security interests".

Questions are now being asked about why Disney's streaming service in Hong Kong, Disney Plus, has blocked a popular episode of the "Simpsons". The episode in question features reference to the famous "tank man" photo from the June 1989 Tiananmen Square protests and massacre. The episode entitled "Goo Goo Gai Pan" also features jokes or references that could be deemed offensive to people of Chinese or Asian descent.

The censorship law which was enacted late last month brings Hong Kong in closer to conformity to the kind of blatant censoring and wholesale blocking of content that's long existed on the mainland. The law spells out that films are prohibited from any content aiming to "endorse, support, glorify, encourage and incite activities that might endanger national security."

According to The Wall Street Journal on Monday:

Disney launched its streaming service, Disney+, earlier in November in Hong Kong featuring an array of programming owned by the entertainment giant, including 32 seasons of the animated comedy series.

Yet one episode is missing from "The Simpsons" lineup: Titled "Goo Goo Gai Pan," the episode from season 16 centers on a trip to China by the show's namesake family. Along the way they encounter a plaque at Tiananmen Square in Beijing that reads: "On this site, in 1989, nothing happened."

Trump's New 'Truth Social' Will Use AI To Censor Users