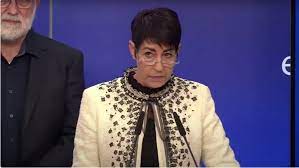 All through Europe, governments have gone to great length to get people vaccinated. We were promised the vaccinations will be a "game changer", and it will restore our freedom…turns out none of that was true. It does not render you immune, you can still contract the virus and you can still be infectious.

The only thing this vaccine did for sure was to spill billions and billions of dollars in the pockets of pharmaceutical companies.

I voted against the digital green certificate back in April, unfortunately it was adopted nonetheless, and this just goes to show there is only a minority of MEPs who truly stand for European values. The majority of MEPs, for whatever reasons unbeknown to me, obviously support oppression of the people while claiming – shamelessly – to do it for the people's own good.

But it is not the goal that renders a system oppressive it is always the methods by which the goal is pursued. Whenever a government claims to have the people's interest at heart, you need to think again.