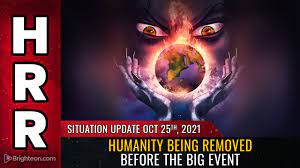 She adds, "We will be bringing in virus in vaccinated people…" and then specifically explains she is targeting unvaccinated people with this biowarfare attack by explaining, "But if you're vaccinated, that's not a problem."

This unthinkable admission of coordinated criminal activity by the government of Queensland is just the latest assault on humanity being waged by Australian officials who are so corrupt and evil, it's almost like they're competing for an award from Satan himself.

Dr. Young is fully aware that vaccines are killing people. She previously warned that blood clot-inducing vaccines shouldn't be given to people under the age of 50, saying, "Wouldn't it be terrible that our first 18-year-old in Queensland to die from this pandemic died from the vaccine?"

Since then, she has been "corrected" by the genocidal medical establishment and anti-human news media that are coordinating their attacks on anyone who questions vaccines. Dr. Young has fallen in line and is now waging actual biological warfare against humanity, bragging that vaccinated people are the super spreaders who will infect everyone.

Watch this stunning comment in the following video. The text callout was added to the video by someone else and was not in the original broadcast video:

Australia Has Fallen. Is Our Nation Next?

'You feel like you're in prison': Aussie recounts ordeal in COVID camp

The Bottom Is Far Lower Than Anyone Believes Possible

So Much For Fixing Supply Chains: