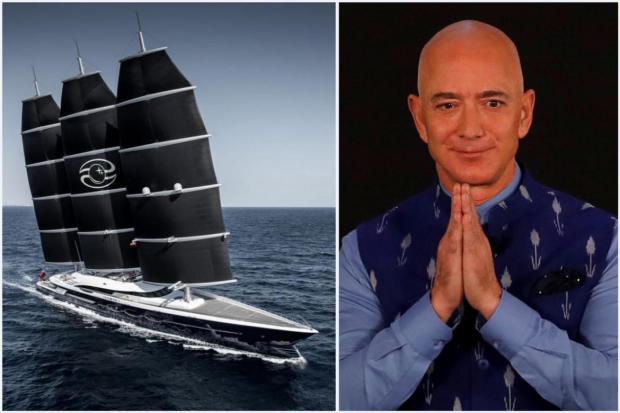 Jeff Bezos's $500million (£423million) superyacht has been seen for the first time as building work continues on the vessel that will be the world's largest sailing boat.

The 417ft (127 metre) yacht known as Y721 was rolled out in the Zwijndrecht shipyard in the west of the Netherlands earlier this week.

It will be the biggest sailing yacht in the world when it is complete in 2022, overtaking the current largest ocean-going passenger ship Sea Cloud.

His ownership of it was confirmed in the book Amazon Unbound, which described the boat as 'one of the finest sailing yachts in existence'.

The black hauled yacht was rolled out the shipyard on its way to Alblasserdam, where it will be given its final fittings.

It is being built by custom yacht builder Oceanco and is thought to be based on the company's Black Pearl ship — one of the largest and most ecological yachts in the world.

The Black Pearl is the largest DynaRig sailing yacht in the world, with three 70 metre-tall carbon masts, and was built in 2018.