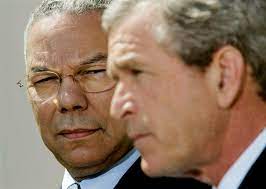 Colin Powell, soldier, statesman, and lifelong public servant to the imperatives of empire, died yesterday, at the age of 84. He is survived by his wife, three children, and four grandchildren. He was predeceased by his eponymous doctrine and at least 185,000 Iraqi civilians.

Born in 1937, Powell preceded by a decade the institution that would define both his life and much of the twentieth and twenty-first centuries. The 1947 National Security Act birthed the Department of Defense, coalescing the bureaucratic innovations in managing war and espionage cobbled together during World War II and setting the United States on a permanent war footing it has never left since. Harry Truman's ordered integration of the armed forces in 1948 made possible Powell's specific path into and through the military, but it was the 1947 act that ensured the United States would always perceive itself in existential peril — and adopt a military-first foreign policy to match.

Powell joined the Reserve Officers' Training Corps as a student at the City College of New York and was subsequently commissioned into the US Army in 1958. This was the relative lull between active US involvement in Korea and Vietnam, but it was still an era of the peacetime draft. The draft, kept in place by the same general who ran it during World War II and would continue to run it until 1970, was maintained in part to drive volunteer enlistment.