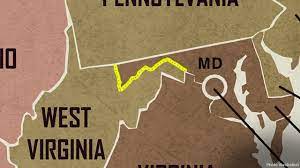 Lawmakers from the counties — Garrett, Allegany and Washington — say their rural, conservative constituents have long been fed up with their overwhelmingly liberal and Democratic fellow Marylanders. They say they have more in common with the folks on the other side of the country road in neighboring West Virginia.

The secession plan was floated by six Republican lawmakers from the counties who wrote a letter to Republican legislative leaders in West Virginia this month asking whether their counties could join that state.

"We believe this arrangement may be mutually beneficial for both states and for our local constituencies," they wrote. "Please advise on next steps."

The proposal, like similar ones in the past, seems destined to go nowhere. Maryland's top Democrats scoffed at the idea, although West Virginia's Republican governor, Jim Justice, and top lawmakers there seized the opportunity to brag about all the ways they think their state is better than Maryland.

The Bottom Is Far Lower Than Anyone Believes Possible

So Much For Fixing Supply Chains: