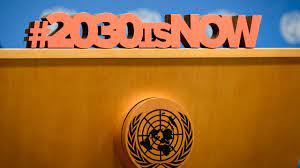 This new government on our horizon explains many of the failures in policies in these first months of the Biden administration.  The failures are based not so much on mistakes as on deliberate sabotage to weaken our country, dilute the power that undergirds our sovereignty, and prepare us to accept one world government.

The seed ideas for Agenda 2030 began with Pres. Woodrow Wilson's League of Nations in his Fourteen Points at the end of WWI.  A community of nations could bring pressure for peace in the world that the treaty or alliance system could not do, as shown by the First World War.  While this idea took hold in Europe and other countries, it was unable to gain sufficient traction in the U.S. as it met with Republican resistance in the U.S. Senate on the grounds that it would lead to a dilution of U.S. sovereignty.

With the benefit of 20-20 hindsight, all right-thinking persons can see that Woodrow Wilson's first giant step toward globalism was rightly rejected.  The League was a complete failure in terms of bringing peace to the world.  To the German Nazi government, the League was a joke.  The Japanese left the League after their invasion of China was repudiated.  Yet Republican sway over U.S. governance became diminished by the four-time election of Franklin D. Roosevelt as president of the U.S. and the hegemony of the Democrat party for twenty years from 1933 to 1953.

Check out the world's first FLOATING CITY! Flood-proof Oceanix - backed by the UN...