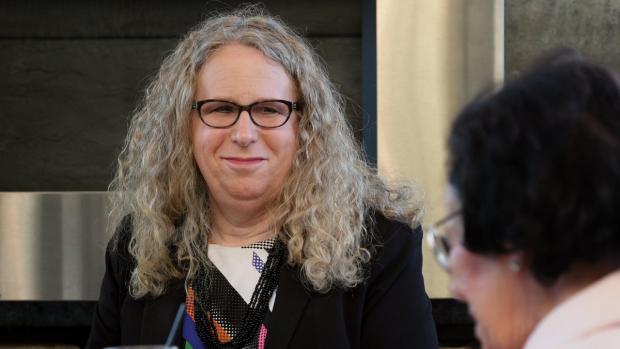 A President Joe Biden appointee became the nation's first transgender four-star admiral when she was sworn in to lead the U.S. Public Health Service Commissioned Corps on Tuesday.

Admiral Rachel Levine will serve as head of the USPHS along while maintaining her position as Assistant Secretary for Health for the U.S. Department of Health and Human Services, which made her the nation's highest-ranking transgender official.

Levine, 63, will lead the nearly 6,000-person force of public health professionals who respond to public health crises, including administering COVID vaccines,  and national emergencies on behalf of the federal government.

'I am deeply honored & grateful to join the ranks of men & women across this great nation who have committed to defend the United States against small & large threats, known and unknown,' Levine tweeted with a broadcast of her swearing in.

'I promise to uphold that trust to the fullest extent of my abilities.'

'I'm proud to wear this uniform and lead the #USPHA #CommissionedCorps. The answer the call as warriors for our nation's health,' she posted in another tweet.

She has announced that she plans to begin wearing the group's blue uniform immediately. The U.S. Public Health Service is one of the nation's eight uniformed services including the Air Force, Navy, Army, Marine Corps, Coast Guard, Space Force, and National Oceanographic and Atmospheric Association.

Although Levine has never served as a sailor, the assistant secretary for health can be ranked as an admiral if they also serve as a uniformed officer of the USPHS Commissioned Corps.

President Biden nominated Levine to the high-ranking position in January, continuing his pattern of selecting a historically diverse slate of leaders for senior administration roles.