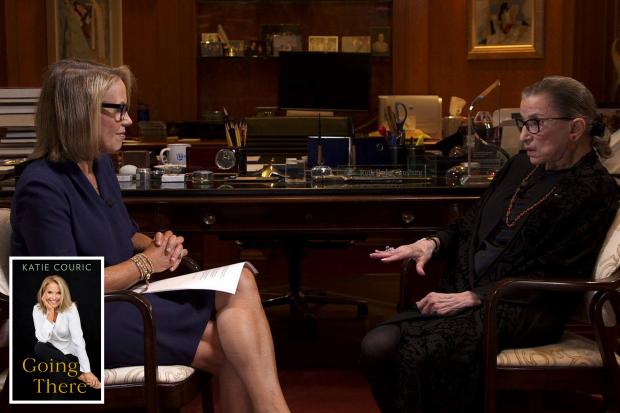 Katie Couric has admitted to 'protecting' Ruth Bader Ginsburg from public backlash by cutting out negative comments she made about people who kneel during the national anthem.

The former Today show host reveals in her new book that she let her personal political views influence her editing decisions after her interview with the late Supreme Court justice in 2016.

In new memoir, Going There, Couric writes that she edited out a part where Ginsburg said that those who kneel during the national anthem are showing 'contempt for a government that has made it possible for their parents and grandparents to live a decent life.'

The published story, which Couric wrote for Yahoo! News in 2016, did include quotes from Ginsburg saying refusing to stand for the anthem was 'dumb and disrespectful', but omitted more problematic remarks.

But Couric writes in her memoir that she thought the justice, who was 83 at the time, was 'elderly and probably didn't fully understand the question.'

The anecdote is the latest controversial revelation to emerge from Couric's book, which is set to be released October 26.

DailyMail.com previously revealed how the veteran news anchor brutally rips into her former colleagues, ex-boyfriends, and celebrities in the score-settling tome, which runs to 500 pages.

Couric, 64, writes that she always tried to keep her 'personal politics' out of her reporting throughout her career.