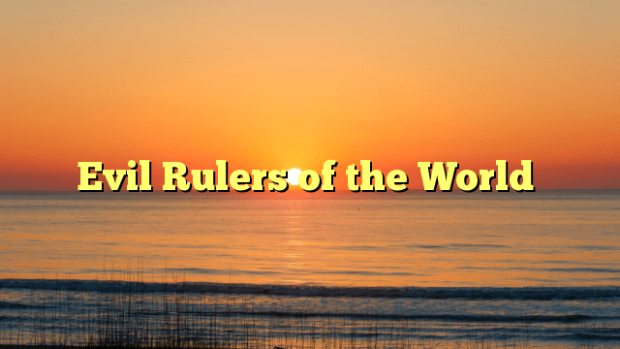 James Madison once said "if men were angels, no government would be necessary." At first glance, this statement may seem to make sense. However, what this statement is really conveying is that "because men are evil, there a must be an institution made up of those same men to control other evil men." Of course, this is nonsensical and very flawed logic. Thus, the best argument against the State is quite possibly the existence of evil. If men are evil, and we know that they are, what possible justification could there be for handing one or more of them unlimited power over others?

Ultimately, Christians ought to recognize the dangers of the State more than anyone. Christianity teaches that humans inherited a sinful nature from Adam and that we were "brought forth in iniquity" (Psalm 51:5). Even the Apostle Paul said of himself, "nothing good dwells in me" (Romans 7:18). Thus, humans, even the most moral among them, are inherently inclined toward evil. And this is why we ought to fear the dangers of the State. The existence of a State necessitates the rule by evil men. However, this problem becomes magnified when a society moves further away from God and becomes more and more secular, like the one in which we currently live. Why is this? Because people must have a purpose in life. Atheists can talk all they want about the meaninglessness of life, but no one can ever actually live that way. Man always needs a higher purpose, and ultimately something or someone to guide them. Thus, if God is rejected by a society, the people will look elsewhere and there is only one entity in this world with unlimited and awesome power: the State. The results of this are devastating, as evidenced by the rise of the Soviet Union and Nazi Germany. Disillusioned people with no other purpose will be attracted to the State. Once this happens, they can be convinced to commit all sorts of evils and atrocities when they are instructed that it is for the higher good or for the survival of the country. It gives man a feeling of power and an opportunity to feel like he is fulfilling a higher purpose. In conclusion, Christians must recognize that man cannot serve two masters, both God and State.

What would you do if they brought the power grid down?