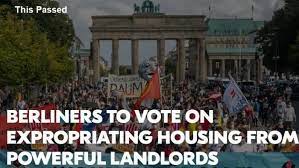 After years of rising rent forcing many Berliners out of the city, activists led by Deutsche Wohnen & Co Enteignen (Expropriate Deutsche Wohnen, or DWE) received nearly 350,000 signatures from Berliners and managed to force a vote on whether to allow the expropriation of housing owned by landlords with over 3,000 units on the Sept. 26 election ballot.

While the movement to expropriate large real estate companies, who have made a fortune speculating on the housing market and causing rent increases over the past decade, has been active in Berlin for years, ironically it was the German Supreme Court's ruling to overturn Berlin's Mietendeckel (rent cap) law that was the catalyst for the current referendum. While this law would not impose a rent cap, DWE volunteer Dennis Rahmel thinks that it would still have a dramatic impact on rent prices in the city. "Prices would go down in the expropriated apartments, which would change the rent not [just for the socialized apartments] but for other people as well, no matter if they were in public apartments or not," said Rahmel. "It would also mean that society could show that there is some power against investors, against big capital, and that housing is a human right… it would be a big sign for other cities, too."