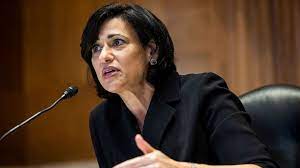 But that didn't go far enough apparently for the far more politically-controlled CDC itself as late last night CDC director Rochelle Walensky went beyond ACIP's recommendation by urging boosters for individuals allegedly at high risk because of their jobs - which was left entirely undefined (we look forward to the union in-fighting over which jobs are 'at-risk').

Notably, the CDC advisory panel, made up of independent medical experts, broke with the FDA on that recommendation in a split decision on Thursday.

The panel specifically said it was concerned the move could send mixed messages about the vaccines, which are incredibly effective at preventing severe illness.

But, hours after the panel voted 9-6 not to recommend boosters for those groups, Walensky overruled them.

"As CDC Director, it is my job to recognize where our actions can have the greatest impact," Walensky said in a statement late Thursday, according to The Associated Press.