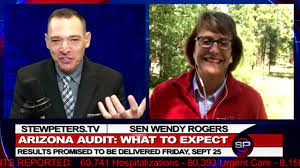 Contrary to the deprecating claims of all the nay-sayers, Sen Rogers confirms to Stew Peters that it's happening and that the results will prove that massive fraud occurred in her state during the 2020 Election.

She says that the next step is for Arizona to decertify their election. Her petition to decertify [SIGN HERE] has already garnered over 950,000 signatures.

Hopefully, other states will follow Arizona's example. She says she's in touch with Conservative state legislators in Georgia, Wisconsin and Pennsylvania and is advising them.

For a peek at the labyrinthine fraud that is about to come out, the State of Arizona cross-checked more than 673,000 voter applicants' profiles with the Social Security Administration and found that 393,017, or 58% of credentials did not have matching records with the SSA, according to the Gateway Pundit.

Of those, 269,493 were "lost" and "ghost" voters. Canvassers have discovered homes where one family has lived for over twenty years, that have dozens of these fake voters fraudulently associated with their addresses.

Bobby Piton is a portfolio manager and a forensic accountant who's been working for nearly a year on the Arizona Audit. Speaking before an audience last August, he said that a mind-curdling scam is being run through the voter rolls:

"I would even say look into AirBnBs...they're starting to figure out creative ways to make money using the property; renting it out while they get voters registered in those properties.

"Think about how conniving these folks are. They raise money to buy properties so that then they could put a bunch of people into those properties that nobody knows how to check on and...we're just scratching the surface...