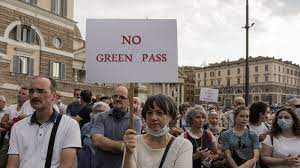 The decree mandates that all employees get the vaccine 'green pass', which led to questions about what would happen to the millions of Italians who remain unvaccinated.

The government is attempting to avoid potential legal action by directing companies not to fire the unvaccinated, but simply to not pay them while telling employees not to show up to work under threat of being fined if they do so.

"Instead, they should be considered to be on an unjustified absence and have their wages or salaries withheld," writes Ken Macon.

"Those found to be working without a vaccine passport could be punished with fines of up to €1,500. Additionally, the government said it would not cater for the test costs for those who would prefer not to take the vaccine."

Even those who have had the virus, recovered and developed anti-bodies will still have to get at least one dose of the vaccine, presumably just as a performative show of compliance.