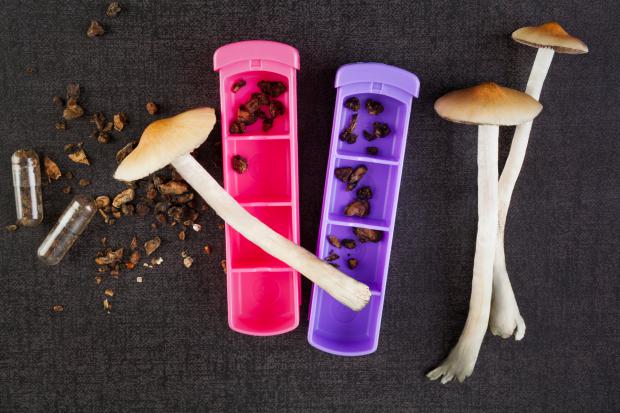 "I always had this kind of idea that, 'Oh, magic mushrooms just grow like deep in the forest and they're hard to identify and all this stuff," says Sean, a Portland-based social worker who asked that we use only his first name in this story.

In 2016, he and his girlfriend were foraging for psychedelic mushrooms in a nearby state park, where the mushrooms were plentiful and easy to find, contrary to his expectations. But he was stopped by a park ranger.

"[The ranger] saw me bending down and screeched to a halt and came up and started questioning me," says Sean. "I knew it was illegal, but I thought, like, 'Oh, they'll give me a ticket or something.'"

He was arrested and spent the weekend in county jail.  He pled guilty to felony possession, which derailed his career. He was fired from his job at a community mental health agency, and it made him ineligible to receive insurance in his private practice.

"It was professionally kind of devastating, personally, it was devastating… It is still impacting me to this day," says Sean.

Four years later, Oregon voters decriminalized low-level drug possession. If that law had been in place in 2016, the park ranger would probably have ticketed Sean $100.

In a separate 2020 ballot initiative, Oregon voters also opted to legalize psilocybin—the psychoactive compound in magic mushrooms—for use in therapeutic settings. Regulators have until January 2023 to begin issuing licenses.

"It's a great thing to be able to start to have this system in place [where] we'll be able to do that work above ground with legal protections," says Sean.

But Sean didn't wait around for the state licensing program. He started treating his clients with psychedelics after his felony conviction destroyed his traditional practice, under the condition that the clients supply the drugs.