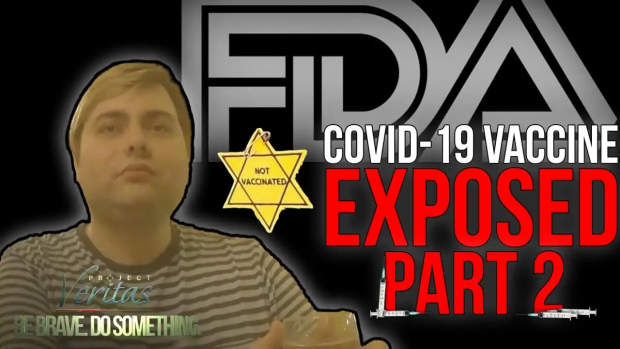 Taylor Lee, FDA Economist: "Go to the unvaccinated and blow it [COVID vaccine] into them. Blow dart it into them."

Lee: "Census goes door-to-door if you don't respond. So, we have the infrastructure to do it [forced COVID vaccinations]. I mean, it'll cost a ton of money. But I think, at that point, I think there needs to be a registry of people who aren't vaccinated. Although that's sounding very [much like Nazi] Germany."

Lee: "Nazi Germany…I mean, think about it like the Jewish Star [for unvaccinated Americans]."

Lee: "I'm gonna go door-to-door and stab everyone [with the COVID vaccine], 'Oh, it's just your booster shot! There you go!'"

Lee: "So, if you put every anti-vaxxer, like sheep, into like Texas and you closed off Texas from the rest of the world, and you go, 'Okay, you be you in Texas until we deal with this [pandemic].'"

Lee: "All of the wealthy white people are getting vaccinated because they're educated."

Lee: "There are political appointees [at the FDA] that are generally scientific advisors or are appointed by the president or the commission…They're being paid based on if the other people are staying in power."

Lee: "Unfortunately, everyone ends up playing politics, but I don't think that the career scientists are -- I think that it's the people that they're unfortunately having to report to because these political appointees are being put in place and that's part of like -- the Senate confirms the people to then just pick their people."