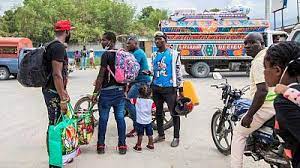 The mass expulsion of Haitians from the United States without screening for their protection needs may contravene international law and constitute forced returns, the United Nations' top refugee official Filippo Grandi said on Tuesday.

He urged the United States to lift its Title 42 health-related restrictions in place since March 2020, saying they "deny most people arriving at the southwest U.S. land border any opportunity to request asylum".

"The summary, mass expulsions of individuals currently under way under the Title 42 authority, without screening for protection needs, is inconsistent with international norms and may constitute refoulement," Grandi said in the Geneva-based agency's strongest statement since the crisis began.

He voiced shock at images of the "deplorable conditions" under a concrete highway overpass in Del Rio, Texas, where more than 14,000 Haitians had gathered after fleeing countries in the Americas, many hoping to seek asylum.