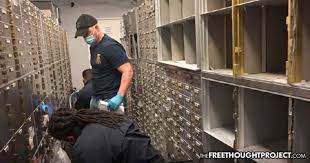 The 1980s-era laws were designed to drain resources from powerful criminal organizations, but CAF has become a tool for law enforcement agencies across the U.S. to steal money and property from countless innocent people.

As the following case out of Beverly Hills illustrates, no criminal charge is required for this confiscation, resulting in easy inflows of cash for law enforcement departments and the proliferation of abuse. This phenomenon is known as "policing for profit" and the latest example is exceedingly egregious.

Using bogus excuses, the FBI raided roughly 800 safe deposit boxes at a single location in Beverly Hills. They made random and apparently unsubstantiated accusations that the U.S. Private Vaults in Beverly Hills was aiding criminal activity. The business was indicted in February on claims that it marketed itself to criminals to help them launder money and dodge government detection.

But no one was ever charged.

Instead, the FBI raided the place and confiscated, or rather robbed people like Joseph Ruiz and others of their life savings. These folks like Ruiz were then forced to prove their innocence in order to get their money back.

The Greatest Failure in the History of Public Health: The Case for the Prosecution