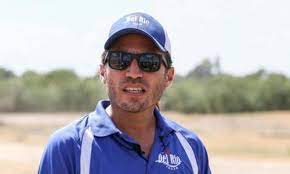 Democratic Del Rio Mayor Bruno Lozano has called out President Joe Biden and Vice President Kamala Harris for failing to make an appearance at his town as it battles with an overwhelming illegal immigrant crisis that has left Border Patrol agents struggling to process thousands of people.

More than 15,000 illegal immigrants, including Haitian, Cuban, and Venezuelan nationals, have illegally entered the United States in recent days and taken shelter underneath the border bridge connecting Del Rio, a Texas town of about 35,000 people, to Ciudad Acuña, Mexico.

While numerous official figures and congressmen, including Rep. August Pfluger (R-Texas) and Sen. Ted Cruz (R-Texas), have visited the town, shared images, and urged the Biden administration to take action, both Biden and Harris have been noticeably absent.

Del Rio now: US on the left, Mexico on the right.
Constant stream back and forth as the illegal immigrants get supplies in Mexico.

Law enforcement preparing against a rush for the border fence as the aliens find out they might be deported. pic.twitter.com/TgxK5Sdrv1