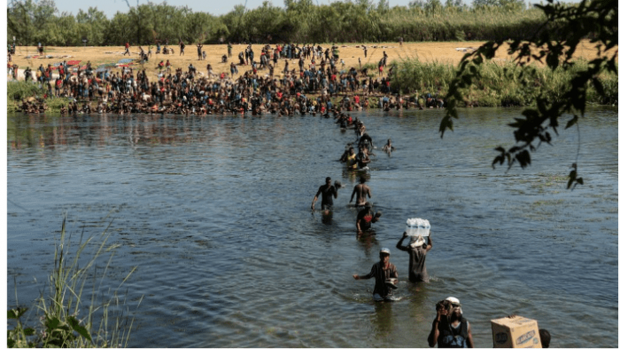 Close to 13,000 migrants, many originally from Haiti, are now in Del Rio, according to officials in the area, overwhelming the resources of local, state and federal authorities. They have formed a makeshift camp under a bridge while they wait to be processed, with a fence on one side and the Rio Grande on the other.

Border Patrol Chief Raul L. Ortiz said at a press conference Sunday there were 12,662 migrants under the bridge and none had entered Del Rio overnight.

Mr. Rios said migrants have been crossing at will for days. In Ciudad Acuña, local authorities have attempted to control the crowds but not stop them from entering the U.S.

Since October, the start of the government's budget year, agents there have made nearly 215,000 arrests, a record for the area.

Still, this city of 35,000 has never experienced anything like the past week. And no one is certain why so many migrants arrived at one time. Word that Del Rio offers a safe place to cross appears to have spread in a community of Haitians who left the poor island nation for South America in the past few years, primarily for job opportunities.