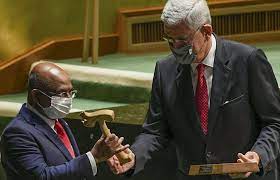 And then came Brazil's President Jair Bolsonaro, who "plans to flout New York vaccine rules at UN meeting". The UN Secretary General was forced to admit that "it would be impossible to deny access to unvaccinated heads of state." Bolsonaro understands globalization and in particular, Technocracy, and refuses to play the role they have assigned to him. As a result, he is being demonized, ridiculed, shamed, bullied and marginalized. ? TN Editor

The debate unfolding around the world over coronavirus vaccine mandates is playing out on a small scale at United Nations headquarters ahead of a meeting of dozens of world leaders in New York next week.

New York City officials have requested that heads of states, and the many diplomats traveling with them, show proof that they are fully vaccinated before entering the U.N. hall for the annual opening of the General Assembly, one of the top diplomatic events of the year.