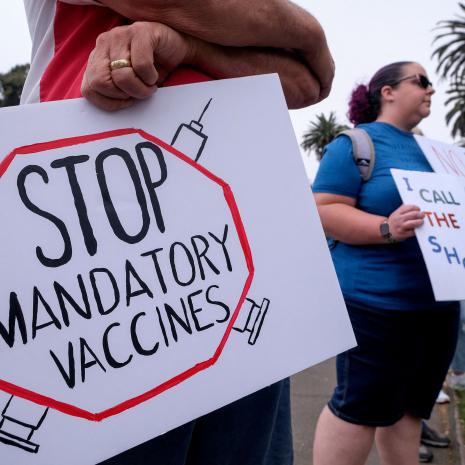 Obviously, however, this means that around half of Americans are fully on board with the mandates.

As we noted earlier this week, a OnePoll survey found that vaccinated Americans are far more likely to permanently sever relationships with friends over their opinion on the COVID-19 jab than those who haven't been vaccinated.

America now faces that reckoning with Biden's plan to impose federal vaccine mandates on every company that employs over 100 people.

As we previously reported, Police and firefighters are among the groups who are resisting, bringing lawsuits against the mandates.

There has also been significant resistance among military service members, who will be mandated to take the shots.

Republican attorneys general from 24 states, almost half the country, have threatened lawsuits against Biden if the mandate takes effect.

Earlier this week, Joe Biden's Commerce Secretary claimed that "nobody is being forced" to get vaccinated, despite last week's announcement that millions of Americans will be mandated to take the shot in order to go to work.

"We are not being forced," Raimondo again claimed, stating "You can work from home, get tested on a weekly basis," and adding "I think this is smart public policy and great leadership by the president."