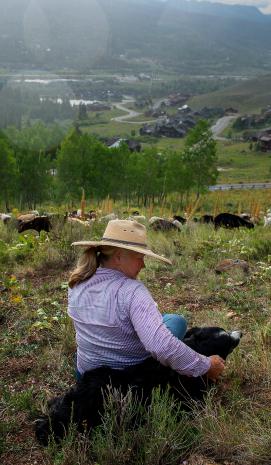 Ms. Malmberg, 64, is a goat herder and a pioneer in using the animals to restore fire-ravaged lands to greener pastures and make them less prone to the spread of blazes.

She developed the fire-prevention technique in graduate school and is among a few individuals using grazing methods for fire mitigation. It's a word-of-mouth business, and private landowners and local governments hire her to remove weeds while restoring the soil.

Ms. Malmberg works with her son, Donny Benz; his fiancé, Kaiti Singley; and an occasional unpaid intern. The team runs on the goats' time and have their dinner only when the day's job is done.

They arrive early and open the trailer. The goats jump out, ready to eat, as Ms. Malmberg watches that they don't stray. The team sets up an electric fence to confine the goats and their meals to a specific area overnight.