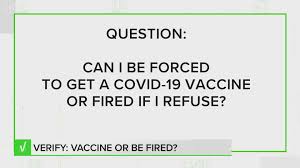 Federal employees can be fired for refusing to be vaccinated against the coronavirus, but as their disciplinary cases wind through the system, they will report to work alongside vaccinated colleagues, according to Biden administration guidance issued this week.

The new guidance to implement a vaccine mandate for the government, which Biden announced last week, represents a reversal of the strategy the White House coronavirus task force pushed in August for those employees without shots who refused under an earlier plan to get regular testing for covid-19.

Then, agencies were told they could place employees on administrative leave, a paid suspension used widely for short-term absences but also when a manager proposes removing an employee.

"They seem like they decided to go with a harder approach," said Jeff Friday, general counsel for the National Federation of Federal Employees, which has about 100,000 members at the Defense Department, U.S. Forest Service and other agencies.

"You're still going to have to work until you're let go," Friday said. "Paid leave is certainly a disincentive to getting vaccinated."

The rules on how to enforce the mandate were among several new details of what will be a complex, potentially messy process that will likely stretch deep into winter if not longer, given the government's sprawling size and presence in every state.