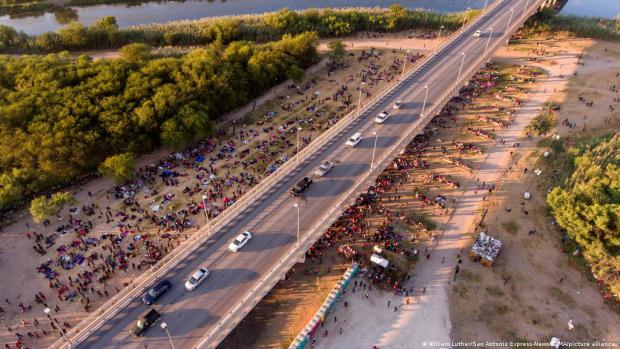 Governor Greg Abbott has slammed Joe Biden for the 'complete disarray' at the US-Mexico border which has left agents 'overwhelmed' as the number of Haitian migrants camped out under a bridge in Texas has now swelled to around 12,000.

The Texas governor announced he was sending National Guard troops and officers with the Texas Department of Public Safety to the state's ports of entry to 'deter crossings' as he compared the migrant crisis to the chaotic withdrawal of US troops from Afghanistan.

'The Biden administration is in complete disarray and is handling the border crisis as badly as the evacuation from Afghanistan,' he said.

Abbott made the announcement Thursday, just hours after he said he was shutting down six ports of entry - before backtracking one hour later and accusing the Biden administration of 'flip-flopping' on its efforts to 'secure the border.'

Around 12,000 mostly Haitian migrants have gathered at the Del Rio Port of Entry and the International Bridge in the city of Del Rio, Texas, in recent days, in a temporary camp which is said to have ballooned after Joe Biden paused deportation flights back to Haiti.

New aerial footage, shot by Fox News Friday, reveals streams of people continuing to cross over the Rio Grande river from Mexico into Texas and joining the already overflowing camp.

The footage was captured by Fox's national correspondent Bill Melugin from a Texas Public Safety (TPS) helicopter after the Biden administration was accused of trying to cover up the extent of the migrant crisis by issuing a flight ban over the US-Mexico border.

The Federal Aviation Authority (FAA) implemented a two-week flight ban over the bridge Thursday night to stop drones capturing footage of the thousands of people living camped out under the Del Rio bridge.

The agency claimed the move was for 'special security reasons' to prevent 'drones interfering with law enforcement flights on the border'.

"The Bidens": Is The First Family Corrupt, Or Merely Crazy?