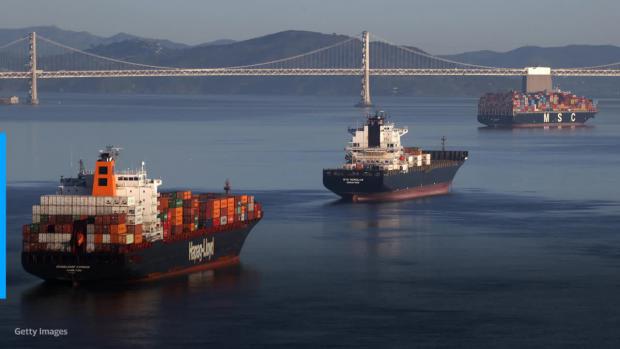 There were an all-time-high 61 container ships in the queue in San Pedro Bay on Wednesday, according to the Marine Exchange of Southern California. Of those, a record 21 were forced to drift because anchorages were full.

Theoretically, the numbers — already surreally high — could go a lot higher than this. While designated anchorages are limited, the space for ships to safely drift offshore is not.

The Southern California gateway is acting like the narrow tube on a funnel: Ocean volumes pour in from Asia and can only flow out at a certain velocity due to terminal limitations as well as limitations of warehouses, trucking and rail beyond the terminal. When the flow into the top of the funnel is too great, as it is now, it creates an overflow in the form of ships at anchor or adrift. This offshore ship queue is equivalent to a massive floating warehouse for containerized imports whose size is only limited by liner shipping capacity and U.S. consumer demand.

Here's Why The Logjam at California Ports