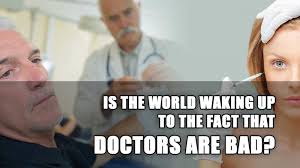 You hear it, too.  In private conversations with people they trust, American citizens are heaping contempt on doctors for forcing a narrative on us that had no basis in science.  Many of us, perhaps even the majority, immediately recognized this virus for what it is: a common flu virus maybe engineered to be more contagious if not more fatal but hardly differing substantially from other influenza strains.  We have lived with seasonal flu all our lives.  We saw no reason to fear it until the medical community, and Anthony Fauci specifically, started telling lies.

And once the lies started, they never stopped.  From a trickle — "It's going to make everyone sick" — to the massive flood of lies about masks, "vaccines," effective treatments, "We're all going to die!," and even rigging the numbers to prove those lies, this scam has been one continual government operation.  It was exploited to allow for the theft of the 2020 election by means of mail-in ballots.  Having accomplished that, its purpose now is to keep the knee of government firmly on the population's neck.

It seems that our doctors went along with the hoax to a large degree because it put them in the spotlight.  Amazingly, almost none of them questioned the lies.

FIRST READING: Buckle up for the mass health-care firings

Pandemic Wiped Out Entire Savings Of 20% Of US Households