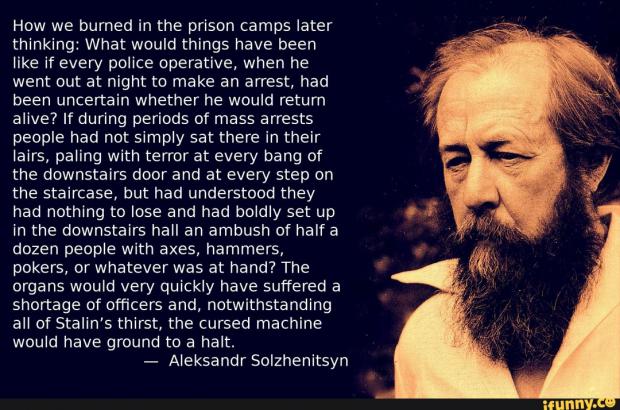 ...here, but before we do, I wanna read you a quote and it's from a book called The Gulag Archipelago by Aleksandr Solzhenitsyn, who lived through and suffered under the Stalin era in the former Soviet Union, where Stalin simply arrested anybody, who didn't agree with the government and locked them up in the gulags. And Aleksandr Solzhenitsyn wrote about it. It's considered a literary classic. May not be much emphasized in America's school system, because a lot of what Solzhenitsyn said about the rise of dictatorship and tyranny in the Soviet Union has parallels in present-day United States.

But there's this one quote and it's in the quotes file, occasionally gets posted to the top of the What Really Happened page, but I feel, it's germaine today with all, that's going on here and the quote goes:

"And how we burned in the camps later thinking, what would things have been like, if every security operative, when he went out at night to make an arrest, had been uncertain, whether he would return alive and had to say good-bye to his family? Or if during periods of mass arrests, as for example in Leningrad, when they arrested a quarter of the entire city, people had not simply sat there in their lairs, paling with terror at every bang of the downstairs door and at every step on the staircase, but had understood, they had nothing left to lose and had boldly set up in the downstairs hall an ambush of half a dozen people with axes, hammers, pokers or whatever else was at hand? ... The organs would very quickly have suffered a shortage of officers and transport and notwithstanding all of Stalin's thirst, the cursed machine would have ground to a halt! If...if...we didn't love freedom enough and even more – we had no awareness of the real situation..., we purely and simply deserved everything, that happened afterward."

Think about that one for a while!

Fanos The Voice Live with Max Igan From Mexico

ANALYSIS: Food rationing to be announced in America, followed by FOOD RIOTS and social...

An American Manifesto: Don't Let Everything For Which This Republic Stands Be Destroyed