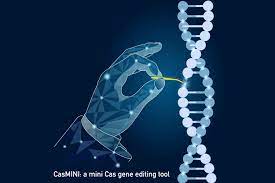 "CRISPR can be as simple as a cutter, or more advanced as a regulator, an editor, a labeler or imager. Many applications are emerging from this exciting field," said Stanley Qi, who is also an assistant professor of chemical and systems biology in the Stanford School of Medicine and a Stanford ChEM-H institute scholar.

In a paper published Sept. 3 in Molecular Cell, Qi and his collaborators announce what they believe is a major step forward for CRISPR: An efficient, multi-purpose, mini CRISPR system. Whereas the commonly used CRISPR systems – with names like Cas9 and Cas12a denoting various versions of CRISPR-associated (Cas) proteins – are made of about 1000 to 1500 amino acids, their "CasMINI" has 529.

The researchers confirmed in experiments that CasMINI could delete, activate and edit genetic code just like its beefier counterparts. Its smaller size means it should be easier to deliver into human cells and the human body, making it a potential tool for treating diverse ailments, including eye disease, organ degeneration and genetic diseases generally.

Global Blueprint Exposed: The Takeover Of All Genetic Material On Earth

BOMBSHELL: This Fauci Experiment Is SICK!

CDC Withdraws PCR Testing Protocol BUT NOT Until December 31st, 2021

Covid Authoritarians Are The Cause Of America's Problems, Not The Unvaccinated