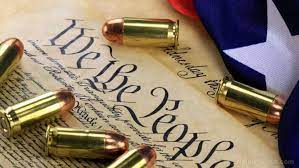 The following description of  the Second Amendment and why it exists, should be kept in mind as we look to Australia and their draconian and dictator-like restrictions and enforcement methods using their military to strip their citizen's rights of choice from them, and the ways that America is following in their footsteps.

Canada is just about on par with the tyranny being seen in Australia, and the rapid rate that American federal and state leadership is trying to mimic them, shows clearly why the Second Amendment is so important now.

THE PURPOSE OF THE SECOND AMENDMENT

"A well regulated Militia, being necessary to the security of a free State, the right of the people to keep and bear Arms shall not be infringed."

• The Second Amendment is part of the US Bill of Rights.

• It gives the right to bear arms in the US, especially for the organization of state militias.

• The right to bear arms was originally seen as a check against the potential tyranny of the new Federal government as well as foreign invasion.

• In the 20th and 21st centuries, there have been conflicts between collective and individual interpretations of the amendment.

Law No Longer Exists So Its Time We Create Our Own

Southwest Is Backing Down On Punishing Unvaccinated Employees...

Foreign Actors Behind the Revolutionary Curtain

Tucker: You're being instructed not to notice this

It ends now because we said so!

I'm 71 years old and have never heard her name.