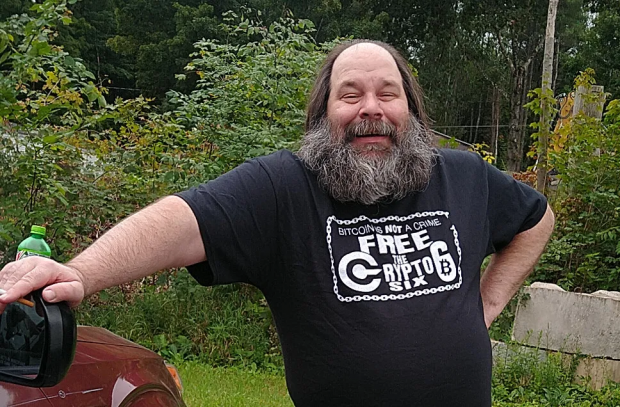 As was the case with my bail conditions, the federal "magistrate judge" denied Nobody's bail initially and the defense had to appeal that "de novo" to the actual judge in the case, Joseph Normand Laplante. Laplante also happens to be the chief judge for the entire Federal District Church Court. Thus far Laplante has been much more reasonable than the magistrates, though the bail restrictions on the Crypto Six have varied wildly.

For instance, Aria DiMezzo is highly restricted on what websites she can visit and must ask permission from her probation officer to go to any sites that are outside her limited "whitelist". However she has no restrictions on drug use. In contrast, I am able to go to any website except for sites for buying, selling, and trading cryptocurrency, am on home confinement, and am subject to random drug testing. I am allowed to use alcohol, though I prefer not to.

No co-defendants are allowed to speak with each other, though after filing motions with the court to remove the contact restriction between us, Aria and I were granted an exception by Laplante for the purposes of being able to perform and run our nationally syndicated radio show, "Free Talk Live". I have a long list of people in addition to my co-defendants with whom I am prohibited from speaking. This includes my longtime co-host and co-minister in the Shire Free Church, Mark Edgington. As part of his bail, Nobody is also prohibited from speaking with the same list of people. Aria has no such restriction.

At the de novo bail hearing, unlike the magistrate, Laplante didn't seem concerned with Nobody's statements on the recorded jail phone that seemed to be in favor of shooting police. He agreed with the defense that Nobody's comments were just blowing off steam as Nobody was frustrated by the outrageous arrest and subsequent caging. Despite Laplante's voiced opinion about Nobody's lack of dangerousness, in a frustrating concession to the prosecution, he has restricted Nobody's freedom of speech and prohibited him from making any public statements on media or at protest events. Here's the relevant portion from page six of Nobody's bail conditions:

Defendant shall refrain from public speaking engagements on radio, television, or podcasts, and shall also refrain from "taking the mic" at public rallies or public events.

It was stated during the bail hearing that the concern was not that Nobody himself would commit violence but that he might influence listeners or followers to do so. So now he has no freedom of speech. This despite an accused person supposedly being allowed to be "at liberty" prior to trial. Does the first amendment not apply to people on bail? Strangely, he had more free speech inside the cage at the Merrimack County Spiritual Retreat where he was held the last several months. Nobody could, and did, call in to Free Talk Live on more than one occasion – so long as Aria or I were not on the show. Now he is specifically prohibited from any audio or tv appearances. He had also, while in jail, begun a newsletter for his church. Will he even be able to continue it?

Arguably, the restrictions as-written don't prohibit his newsletter or perhaps even blogging. However I wouldn't blame him if he chose not to rather than risk a post to Free Keene being considered "social media", violating bail and getting locked back up.  Hopefully his attorneys will be fighting to get his right to free speech respected again.  On the positive side, he's not restricted on travel and can leave his home without permission from his federal handler.

So much for freedom of speech. That said, I'm glad Nobody's finally out.

Fanos The Voice Live with Max Igan From Mexico